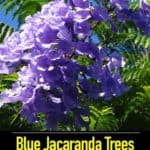 Jacaranda mimosifolia (jack-uh-RAN-duh mih-moe-sih-FOLE-ee-uh) is a sub-tropical deciduous flowering tree, which belongs to the family Bignoniaceae.

It is native to South America, particularly north-western Argentina and southern Bolivia.

Its genus name is a Latinized form of an aboriginal Brazilian name, and its specific species means “leaves resembling those of mimosa.”

Prized for its beautiful lavender-blue flowers, the blue jacaranda is extremely adaptive in nature and grows in any subtropical climate, provided its climate needs are met.

Jacaranda mimosifolia is naturalized in the warmer regions of eastern Australia, Hawaii, southeastern United States, southern countries of Africa, and outside the boundaries of Argentina and Bolivia in South America.

The hardy tree grows near riverbanks, grasslands, and wooded ravines.

The blue jacaranda has a spreading growth habit and can outnumber native plants.

Seedlings can grow beneath mature planted trees, which allow them to expand and prevent native plants from growing.

Because of this, it is listed as a Category 3 invader in South Africa and must be prevented from unchecked spreading.

NOTE: South Africa is known as ‘Jacaranda City’ due to a large number of Jacaranda trees planted as street trees and in parks and gardens.

It is also a common tree in San Diego, California.

Jacaranda mimosifolia is a fast-growing shade tree sprouting to heights of 60′ feet tall, spreading its branches into a crown shape.

Its thin bark is silvery-brown in color, smooth when young, but gradually becomes finely scaled as the tree grows older. Its slender twigs form a zigzag pattern and are light red-brown in color.

The blue jacaranda has large bi-pinnately compound leaves that can grow up to 18″ inches long with leaflets just 0.40″ inches long.

The lavender-blue flowers are tubular and approximately 1″ to 2″ inches long and are grouped in 7″-12″ inches panicles.

They are followed by round, flat, woody, reddish-brown pods that contain several tiny winged seeds. The tough seed pods are 2″ to 3″ inches wide and are used as Christmas decorations.

The blue jacaranda produces clusters of trumpet-shaped purple-blue flowers with a light fragrance.

A white variety is also available in nurseries.

Jacaranda flowers bloom from March to July, though in warmer areas, the tree can flower at any time.

When these ornamental trees are in full bloom they are breathtaking!

Most flowers open up in the early hours of the morning between 5 am to 7 am.

Jacarandas thrive in USDA plant hardiness zones 9 to 11, though they can live in any part of the world where there is no frost.

They are hardy down to 19° degrees Fahrenheit but do not flourish in areas with frequent bouts of sub-zero temperature and cool winds.

Jacarandas grow best in bright full sun though they are susceptible to trunkscald in areas with very high temperatures. Small trees can live under minimum shade.

Never allow the soil where you have planted the jacaranda tree to become fully dry. The frequency of watering should be based on the soil moisture content.

Watering should be performed when the top 3″ inches of the soil have become dry.

An annual application of 10-10-10 fertilizer will be sufficient for blue jacarandas to flourish. One tablespoon of fertilizer should be enough for one square foot of soil beneath the tree.

Since jacaranda trees are quite adaptable, they can grow in a wide variety of soils; however, they particularly prefer sandy, slightly acidic soil.

Jacarandas are tolerant of droughts but do not flourish in wet, swampy soils, so the soil must be fast draining.

They also should not be grown in coastal areas as their leaves suffer from the salty sea spray.

Blue jacarandas can be transplanted in the winter after they shed their leaves, but before they start to bud in early spring.

Jacaranda trees should be pruned to form a single central trunk for a stable foundation. Excessive pruning of jacarandas can promote vertical suckers that warp the tree’s shape.

Pruning should be done in late winter after the tree has shed its leaves. Remove only 25% of the tree’s growth, including all its split and diseased branches, as more than that, can lead to sunscald.

Jacaranda trees should also be grown away from swimming pools, car parking, recreation areas, and patios as their flowers and leaves can create a pile of debris, which can rot into a slimy, smelly mess.

How To Propagate Blue Jacaranda?

Jacaranda trees can be propagated through seeds, softwood cutting, and grafting.

For best results, seeds should be soaked in water 24 hours prior to planting.

Germination will begin after 10-12 days and can continue for up to 2 months.

At least 8 months should elapse before the plant should be transplanted.

Since seedlings take a lot of time to bloom, most people prefer branch cuttings and grafting.

These trees often grow limbs with narrow crotch angles that have a high chance of breaking from the tree.

Hence, pruning is strongly recommended to prevent this and to keep branches less than half the diameter of the trunk, in order to promote strength and stability.

Jacaranda is fairly resistant to insects and diseases. It can develop mushroom rot if the soil beneath it does not drain properly.

It is also vulnerable to aphid and whitefly infestation. In this case, you can use a mixture of neem oil, pesticide soap, and water to get rid of the outbreak.

While watering, make sure the water reaches the root of the plant may become chlorotic.

Blue jacarandas have an ornamental value because of their beautiful purple flowers.

The woody reddish-brown pods produced by these trees are used as Christmas decorations and in other dried floral arrangements.