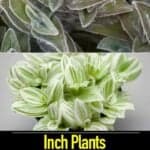 A fine old American family of plants once definitely considered “middle class,” now almost aristocratic. Botanically Commelinaceae, popularly the Spiderwort family, and even more commonly inch plant or wandering Jew – this multi-colored, multi-habited group includes some of the most unusual, enjoyable, and adaptable plants to decorate the home.

Now don’t recall great Grandma’s inch plant – a fastgrowing rambler with leaves striped or plain, bright or somber – and consider the subject closed. Unless you’re a botanist, you’ll find some surprises in this fascinating family.

For one thing, not all-inch plants are trailers. Some creep around. Some don’t go anywhere but up and out – like Rhoeo discolor (Moses-in-the-cradle).

There’s so much variety, you may not want to read any further unless you’re immune to the bite of the collector’s bug. I’m not – and you should see all the inch plants you can collect!

America can’t claim the Commelinas – they come from many countries in tropical Asia, Africa, Mexico, Central and South America, and even the ocean islands. Botanical encyclopedias list more than 25 different sub-families (genera) entitled to the family name.

What are the characteristics that relate Commelinas to each other?

Generally (and note that word; all Commelinas do not have all of these characteristics), they’re fleshy, succulent-looking plants with watery stems.

Their leaves are placed alternately – one here, at one side of the stem; the next on the other side, spaced at a regular interval. The “sheath” wraps their base, part or all of the way, around the stem.

The typical leaf shape is oval – long or squat – with veins running parallel from stem end to leaf tip.

Most Commelinas have flowers that bear organs of both sexes (bisexual, like the African violet). But here, the family traits start to diverge in several directions.

It is by certain technical characteristics of the flowers that scientists can classify Commelinas into various groups. The tradescantias and zebrinas, for example, are very similar; unless they’re in flower, it’s difficult to tell them apart.

By the way, the similarity of appearance is not the only confusing factor. The matter of names is also not clear-cut.

Sometimes authorities differ, and often scientific progress has re-sorted and re-assigned a variety to a new or different genus. As far as possible, here, we included all the names available at present.

A Cultural How To For Commelinas

In a large family with such varied origins, there’s bound to be some difference of opinion among the plants on how they like to grow. Specifics are shown below.

Generally speaking, the erect varieties are slow growers and prefer to remain that way. This is an asset when your growing quarters are overcrowded. They need only ordinarily good soil and a small amount of supplementary plant food (liquid fertilizer) at not too frequent intervals.

The trailers – the ones best known as inch plants are another kettle of fish.

With no food, even in the poorest soil, they’ll stretch out scraggly and ugly unless you’re on your toes. Pinch out the tips to encourage branching.

Also, cut the whole plant back fairly frequently. Then, root the cuttings and start over again. This way, you’ll always have a plant flourishing in the flush of youth.

These plants do have one unfortunate habit. The lower leaves will naturally crisp and dry up. This happens even more frequently when the plant is kept too wet.

When the leaves first take on a sickly, watery, slightly slimy look (before they dry), that’s your sign to hold back the water.

The more sun, the brighter the leaf color – generally. Some varieties are too delicate for the hottest sun. Since most of these plants develop big root balls in a hurry, you’ll find repotting necessary more frequently than for many other types of plants.

The Commelinas are eager to produce offspring – from seed (if you can get it) and from stem cuttings. These can be of any desirable length from three inches up.

Remove the bottom leaves so that roots may come out of the joints. Place cuttings in a glass of water or jar on the window sill or in vermiculite or any other propagating medium.

You don’t even have to provide the extra humidity, so many more delicate cuttings require. But, on the other hand, too much dampness will rot the stems.

A Note About The Variegated Varieties

Shoots with nearly all-white leaves like some on Tradescantia fluminensis variegata and Tradescantia Tricolor are touchy about making roots. But, unfortunately, they have no “stomach,” not enough chlorophyll to carry on the life processes.

So select cuttings with some proportion of green. On the other hand, many variegated plants have different patterns in leaves on different stems. So you’re quite justified in choosing the patterns you think are prettiest to propagate.

For a new plant that’s bushier and fuller in quicker time, pot several cuttings together.

The Commelinas are delightful and adaptable decorators for the home. For example, try twin hanging baskets on either side of a window, with matching or contrasting trailers.

Or try a daring combination of a plain-leaved and a variegated, or a large-leaved and a small in the same pot. They’ll mingle delightfully.

Just make sure you select varieties that have similar ideas about the amount of sun and moisture preferred.

The inch plants are the most effective edgers for window boxes – indoors or outdoors – or for special effects in flower arrangements.

There are many ways to use and decorate with Commelinas. However, all the varieties mentioned below are by no means all there are to choose from.

These are the ones we’ve collected, grown, and enjoyed. But, there are plenty more for you to discover for yourself.

IF YOUR INCH PLANT LOOKS LIKE THIS… ITS NAME IS PROBABLY:

Rhoeo discolor (Moses in the cradle)