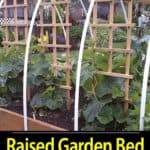 Raised garden beds are a very popular way to grow vegetables with all kinds of styles. The raised bed in this picture is really done right. I wanted to briefly share why I think so!

There are lots of raised bed garden tutorials on the web, with lots of approaches. But this raised bed looks like it has done everything right.

Subtle modifications could be made for your needs. But all the basics are in this raised garden bed. There are lots to take away from this picture alone.

Although I cannot see it, I would bet they took the extra step and put a raised bed irrigation system as well.

This raised bed garden “growing system” is just done right. Read the full post which is short but take time to read the comments… some good tips in there: via Andrewsseed

There is much we can learn from the above raised bed image.

I’m confident this “growing system” did not happen overnight, but developed over several seasons. However, the raised bed does appear like new construction or a complete overhaul.

This raised garden probably started years ago constructed merely with a frame on the ground. Over time the gardener experienced pests “coming” from below.

The concrete foundation “fix” that issue.

Improving and building the soil is ongoing each growing season with the addition of new compost and a soil test.

The bed width fits them perfectly allowing for easy harvesting and ongoing care for the garden plants.

After discovering the advantages of growing in a raised bed, they learned there was vertical space not in use. The tall wood trellis was added.

After experiencing seasons of early frost, the PVC hoops were added to accommodate covering with plastic to get plants off to an early start or extending the growing season.

Or possibly a netting is used during the growing season to keep pests and wildlife away.

However, this raised bed garden with all its simple homemade features began as so many garden projects do – with an idea. After gaining some knowledge and experience, improvements were made.

That’s what makes growing plants so special. There is always something new to learn and improve.