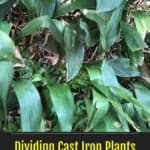 Sometimes it only takes one standout in the crowd to bring attention to an entire group.

This is the case with the cast iron plant, which had been popular for a few centuries but suddenly hit the spotlight and brought attention to its genus.

As a result, Aspidistra (ass-pih-DIS-trah) has gone from only 8 to 10 known species in the 1970s to approximately 192 today.

As for the cast iron plant, the name belongs to Aspidistra elatior, as well as its cultivars and select cultivars of Aspidistra lurida and Aspidistra yingjiangensis.

These plants have a strange way of blooming and seldom bloom indoors, so propagation is almost exclusively done through division.

How To Divide Cast Iron Plant

The roots of a cast iron plant are its Achilles heel, so dividing requires a little finesse.

However, you can easily create more of these wonderful plants with proper care.

You will want your cast iron plant to establish itself and get a little growth before dividing so the roots won’t be as delicate.

Generally speaking, the best time to propagate is in spring to early summer, so the plant has time to recover before hitting its dormant phase.

For potted plants, do the following steps:

Here are the steps to follow when preparing a potted plant.

Garden plants can be easier and more difficult to uproot, as the roots aren’t as contained.

Here are the steps to prepare the garden plant:

At this point, the division is pretty simple by doing the following steps:

For repotting a divided plant, make sure to follow these steps:

The process for planting freshly divided cast iron plants is essentially the same as with a potted one.

Is There Any Special Aftercare?

Cast-iron plants get their name because they can handle a lot of abuse and neglect.

As their roots are the most fragile part of the plant, you can immediately put the freshly divided plants in their permanent homes without having to worry about waiting for them to heal over.

Just remember not to water them heavily right after the division, as the loose soil can often make it harder to tell if you’re adding too much water.