The Harlequin bug is a remarkably flashy and regrettably good-looking ‘bad garden bug‘ insect that can do a great deal of harm to their favorite host plants your cruciferous veggies.

This little stink bug is a true bug in that it has piercing, sucking mouthparts.

Its official name is Murgantia histrionica (Hahn) but it is commonly known as:

It should not be confused with the Harlequin beetle, which is a different creature altogether. 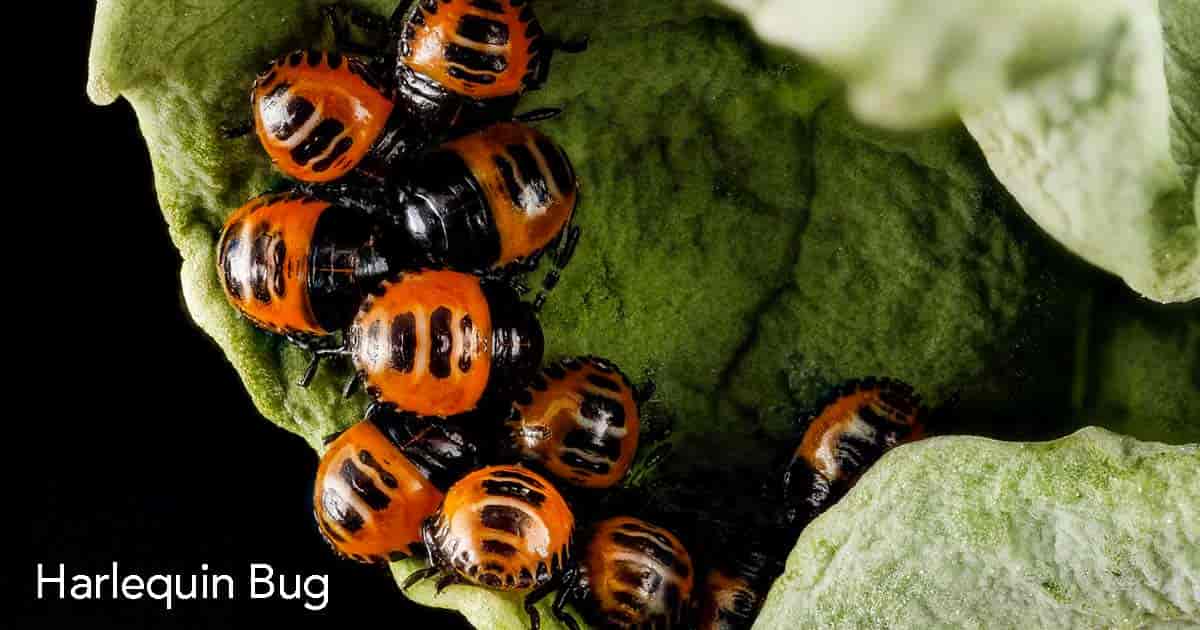 This very pretty and very smelly stink bug is native to North America and many parts of tropical America.

Harlequin bugs can be found in abundance in the southern United States from coast-to-coast.

They may occasionally be found somewhat north of Pennsylvania and Colorado, but this is quite unusual.

It is believed that these bugs were originally distributed throughout the southern states from Mexico in the late 1800s.

What Damage Do Harlequin Bugs Cause?

Harlequin bugs destroy plants by piercing them and sucking their sap. This causes plants to wilt, become brown and eventually to die.

These bugs do a great deal of damage to cruciferous veggies throughout the southern United States.

They can destroy entire crops if they are not quickly and effectively controlled.

Harlequin bugs cause a great deal of damage to economically important crops such as:

If they are unable to get these host plant veggies, they will consume:

If no garden plants are available, they will move on to fruit trees, field crops or even weeds.

They prefer cruciferous plants because of the mustard oil glycosides they contain.

It is this chemical that gives these plants their sharp taste, and is also an important element in this stink bug’s defensive smell and taste.

These insect pests are gaudy every step of the way!

Like adult harlequin bugs, Harlequin bug eggs are flashy and striking in appearance.

They look like small black and white striped barrels.

It takes about a month for eggs to hatch. The exact length of time is dependent upon the temperature.

When the eggs hatch, the nymphs go through about half a dozen instars to reach maturity.

This takes between one and two months. At about nine weeks of age, the nymphs are fully mature and can reproduce.

The appearance of the nymphs changes with each instar.

They start off their first instar being a rather pale orange with a brown head and jaunty brown stripes.

In the final instar, as adults, they become jet black with striking yellow and white markings.

Pea-sized nymphs are typically quite rounded, plump and soft.

As they mature, the bodies of these garden pests become flat, elongated and hard.

The dime-sized adults are winged, and when at rest they cross their wings giving the appearance of having a distinctive X on their backs.

When Are Harlequin Bugs Most Active?

In the southernmost states, Harlequin bugs are able to feed, mate and lay eggs year-round.

As their range moves farther north, mature bugs will tend to overwinter in deep grass, cabbage stalks or leaf litter on the ground.

Nymphs are typically not able to survive winter weather, but most adults can go into a semi-dormant state and emerge in early spring to eat your young garden plants and reproduce.

How To Pest Control Of Harlequin Bugs?

There are several ways to control Harlequin bugs, and happily, none of them include poisons and chemicals.

Vigilance is your best friend when dealing with these pests.

Examine your plants carefully looking for the bright, colorful bugs, nymphs and eggs.

Luckily, they are very easy to see.

When you see the mature bugs or the nymphs, the easiest organic control is to pick them off or shake them off into a bucket of soapy water.

When you see the eggs, simply remove the entire leaf and drop it into the bucket of soapy water as well.

If plants are badly infested, remove the whole plant and seal it in a plastic bag or burn it.

In this video, the presenter explains how to deal with these bugs using a vacuum cleaner!

Nonetheless, Harlequin bugs are the intended pest targets of her vacuuming control method.

Lure Harlequin bugs away from your desired crops by planting trap crops.

Early in the season, plant some mustard, turnip or kale to lure the pests in. (You may also plant this trap crop late in the autumn after harvesting your main crop.)

Once the trap crop is heavily infested with Harlequin bugs, bury the crop in straw and set it on fire!

If this is not possible, resort to using a pesticide since you don’t intend to eat your trap crop.

It’s important to note that if you plan to use trap crops, you must be extremely vigilant and move quickly when the time comes to do away with your pests.