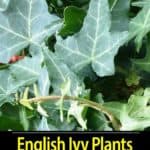 The English Ivy Hedera helix, care as a houseplant is not difficult for those just starting out or seasoned indoor plant veterans.

English ivy the common name for Hedera helix is probably one of the most durable of all houseplants, but care must be taken with watering.

During the active growing season, when Hedera helix is growing in a pot, they do like a regular diet of a liquid feed fertilizer like Miracle Grow, about every 3rd watering.

For best results, use a well-drained soil designed for houseplants. An English green ivy plant can be an active grower and can require frequent repotting.

NOTE: A potted English ivy makes a nice plant addition for the bathroom.

How To Propagate English Ivy

One of the outstanding characteristics of English ivy is the case with which it propagates.

New plants will start easily from cuttings taken at almost any time of year; the cooler periods, however, are preferable.

The first way to propagate ivy indoors is by layering.

For starters, select a climbing vine or a runner which is fairly long.

Short pieces, known as mallet cuttings, with only one strong node and having potential roots below a tuft of leaves, do nicely; so take longer cuttings of older wood.

Just under a leaf joint about half way down the stem, very carefully strip away about an inch of bark.

Next “pin” the area where the bark has been stripped away down to the surface of another pot with moist potting soil.

Hold the rooting stem in place with a paper clip or piece of electrical wire.

Once the stem has rooted and given some time to develop, clip the stem from the “mother plant.”

English ivy can also easily propagate by tip cuttings. The problem is – tip cuttings root easily but do not develop very fast.

During the spring or summer months, take tip cuttings and stick them is a good indoor potting mix. The cutting can be dipped in a rooting hormone if desired.

Place the container of cuttings in an area where it will receive bright light but not direct full sun. In a few weeks, roots will form and the cuttings can be replanted in a new container.

Attacks of pests and diseases are very infrequent.

Indoors plant scale and aphids can be a problem attacking new growth and hiding under leaves. This can produce leaves that are distorted, malformed and have a stickiness secreted from the insects.

Treat with a pesticide (neem pesticide), an insecticidal soap or Malathion. Make sure the plant is sprayed thoroughly including the undersides of the leaves. That is where many plant bugs like to hide.

Thrips can cause silvery patches that are glossy… treat with an insecticide – again Neem is good.

Leaves turning black, unusually in winter this is caused by over-watering.

Question: My English ivy, both indoors and outside, has small webs on the leaf undersides and leaves are yellowing. The overall appearance of the foliage color is not the normal dark green leaf but have a dusty appearance and some of the leaves are flecked with yellowish spots. Pinpoints of black dots on the surfaces of the leaves. What is the trouble and how can it be treated?

Answer: It sounds like red spider mites have infested your ivies – this can be the most destructive pest on ivies. Try washing leaves top and undersides along with the stems, increase humidity. Spray with neem or insecticidal soap.

Particularly indoors ivy needs a cool, moist place in which to grow. In temperatures above 72° degrees Fahrenheit in a dry atmosphere, it is almost impossible to keep red spiders off of English ivy.

Question: A number of leaves have turned yellow and fallen from my English ivy and the new shoots turn black and dry up before they can make any growth. There do not appear to be insects on it. I have always sprayed it with a strong force of water once a week since I received it two years ago. It gets enough light with occasional sun. Could you diagnose the trouble? VB, Illinois.

Answer: The trouble with your ivy may be high temperature coupled with dry air. Temperatures above 70° degrees Fahrenheit with dry air cause ivy leaves to lose vitality. Then too, keeping the roots wet without adequate drainage causes the soil to sour.

The roots rot as a result and as the root system ceases to function the leaves yellow, new growth blackens, leaf spots become more frequent and eventually the entire plant dies.

If when the plant is watered all free water drains away, if the soil is kept moist but not sopping wet, and if the temperature is moderate, the small ivy plant is almost indestructible.

You also like the Chestnut Vine (aka Tetrastigma Voinierianum) and this selected group of 35+ common houseplants.

English ivy Hedera helix is one of the most creative plants in nature!

From the Araliaceae family along with Schefflera (dwarf umbrella plant) and Aralia (think the Ming plant), most varieties are evergreen climbers, can easily grow indoors and out.

The English ivy has several look-alikes:

The European colonists introduced English ivy as early as 1727.

However, today many in the United States consider the English Ivy Hedera helix a serious weed and invasive species. Outdoors this climbing vine needs some type of control.

Learn more on – How to Kill English Ivy

Outside, the ivy finds use as a ground cover but they also can climb up trees or grow up against the brick wall of a house.

They grow well in bright light and partial shade. The general recommendation is to NOT PLANT the ivy outdoors. It’s better suited for potted container growing.

Indoors, they can grow into beautiful tabletop house plants, grown in hanging baskets or trained on small trellises.

Ever since it burst into various mutations in the 1920s, when the first self-branching forms were noticed, ivy has amazed us with the many unusual, countless forms it can assume.

The plant can even be grown to create a stunning decorative accent, yet in any size it is most attractive as a pot plant.

It is a great deal of fun to grow vigorous ivy plants and it can be done with a minimum of time and effort. They grow with crazy abandon as a ground cover.

They are a joy to study as there is such a diversity of foliage forms.