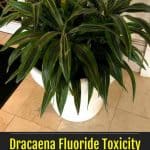 Out of the many broadleaf evergreens out there, the Dracaena genus provides some of the most beautiful options.

These subtropical plants are popular among plant enthusiasts but have a reputation for being somewhat difficult to care for.

Contrary to this belief, most of a dracaena’s needs are easy to care for once you understand them.

These care methods will even benefit your other plants.

However, one of the most common health problems a Dracaena plant faces is fluoride toxicity.

Knowing how to water dracaena plants can prevent this illness, but understanding what it is and how to treat it will help you care for many other common plants as well.

What Causes Dracaena Fluoride Toxicity And How To Fix It

This can lead to some serious health issues in many popular plants, such as lilies, spider plants, and Tahetian bridal veil.

Fluoride is a naturally occurring chemical that can be found everywhere.

Apatite, cryolite, feldspar, and mica all release fluoride as they erode, for example.

As a result, all plants will get some degree of exposure to fluoride.

The problem arises when they come into contact with abnormal amounts of the chemical.

Fluoride is an accumulative toxin, meaning the plant cannot get rid of fluoride once it’s absorbed.

Too much fluoride can cause toxicity and will severely harm or even kill your plant over time.

Symptoms of Fluoride Toxicity in Dracaena

Fluoride settles in the leaf margins of your plant.

From there, it inhibits natural functions such as photosynthesis.

The affected leaves will begin to suffer necrosis, with the margins and/or tip browning or yellowing.

Some varieties, such as ‘Dracaena Janet Craig’ and Dracaena Lemon Lime will turn yellow, while others, like Dracaena massangeana (corn plant) will have a tan discoloration.

This discoloration will slowly spread inward as it kills off the leaf.

Salt toxicity can cause similar symptoms, and both can be caused by accumulation in the soil.

Unfortunately, there’s no simple cure once necrosis begins, as the condition is irreversible.

The best treatment is to carefully prune away any necrotic leaves.

However, you will also need to identify the source of fluoride and eliminate it.

This means doing an early repotting and possibly changing the type of soil or water you’re using.

The single most common cause of fluoride toxicity in houseplants is tap water.

Municipalities typically add fluoride to the water, along with other chemicals.

Filtering the water can help reduce these chemicals, depending on the type of filter used.

However, it’s safer to use natural rainwater, when possible.

Additionally, you should use distilled water (sometimes called baby water) when rainwater isn’t an option.

Avoid using soils high in phosphates, as these will include larger amounts of fluoride naturally.

A low pH balance can also encourage fluoride content in the soil.

For plants that require low pH or high phosphates, you can add calcium, which will bind the fluoride so less can be absorbed by the plant.

However, it’s best to purchase growing medium or potting soil that best suits your dracaena so you can eliminate these two factors.

You should also change or leech the soil mix annually to remove salt and mineral buildup.

Note that perlite is usually a great soil amendment, but when growing Dracaena you may wish to avoid it if you are already worried about the fluoride content in the soil.