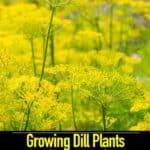 Dill plants (Anethum graveolens) [fal-KAY-tuh grav-ee-OH-lens] is found throughout the Mediterranean, Europe, and most kitchens. Dill is a popular kitchen herb people frequently grow for flavoring.

It’s been used for over a thousand years and is mentioned in the Bible. It is believed to come from Persia and India before spreading elsewhere.

While dill plants are a favorite, and are rarely sold in nurseries. Purchase a packet of seeds and use the following tips to start growing dill.

The dill plant can get quite large if given enough space. It produces thin, swaying stems with feathery leaves reaching between two and six feet.

It’s rarely grown indoors, due to the size of the plant and the fact that it dies out each year.

The small yellow flowers don’t last very long. They appear in clusters of five to nine flowers per stem.

After flowering, seeds are spread, allowing the plant to reseed itself throughout the season.

The entire plant, including the stems, leaves, and flowers, produce a strong scent of dill.

For those who like the smell of dill, grow the plant near the back of the house, to allow the scent of dill to drift in through open windows during the summer.

The plant is recommended for USDA hardiness zones 3 to 7 but grows almost anywhere. It prefers cooler weather and may not grow well in zones 9 to 11, which includes the southern states of the US.

When growing dill remember it likes sunlight and needs a full sun spot in the yard. If grown indoors, direct sunlight is not recommended.

If the plant doesn’t grow, try sowing the seeds early in the year, when the nights tend to be cooler and the soil may not be as dry.

While dill grows easily, it can suffer from overwatering and drought. The soil should never be soggy. The plant should also never dry out.

To strike the right balance, grow the plant outdoors in containers or pay attention to the amount of water used. The amount can then be increased or decreased as needed.

Apply liquid fertilizer for occasional feeding. During the summer months, feed every two to three weeks.

Dill thrives in porous soil with good drainage. The soil should be loose, to aid aeration and drainage.

Dill is grown as an annual herb, it doesn’t need transplanting. It should die out at the end of the year after it blooms and produces seeds.

After the dill plant flowers, it will spread seeds. These seedlings may start to grow and be removed and used to produce new plants.

At the end of the growing season, dead stalks can be cut down.

The only way to propagate is from dill seeds. Sowing the seeds at different times of the year produces fresh greens throughout the season.

To maintain a constant supply of fresh dill, sow the seeds in early spring, immediately after the last threat of frost.

The first sowing should produce fresh ready to trim greens for use in cooking by the time the third set of seeds are sown.

Sow the seeds about a quarter of an inch deep. They should be placed 18″ inches apart and then gently raked into the soil.

The seedlings should appear in about 10 to 14 days. About two weeks after the seedlings emerge, thin them out, keeping the plants 12″ to 18″ inches apart.

When grown outdoors in quality soil, there are typically no pests or diseases to worry about.

While most pests leave the plant alone, aphids may occasionally become a problem.

It’s important to never use insecticide on plants grown for food or flavoring.

If aphids are detected, spray the plant with water from a garden hose.

The plant may need spraying several times to remove the pests.

For severe infestations, the plants should be removed, reducing the risk of the aphids spreading to other plants.

While dill is often grown in gardens, it can also be grown in large pots.

Set potted dill on a balcony or porch where the feathery plant can add color and airiness to the environment.