Here’s the deal! Did you ever ask yourself this question – “Is cucumber a fruit or a vegetable?”

All fruits and veggies are very healthy additions to any diet, but there are some members of the produce category are simply hard to categorize. 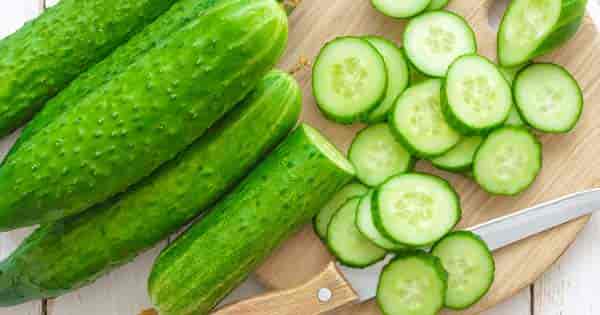 A few that come to mind are:

In this article, we answer the this simple question “cucumber fruit or vegetable?”

We also share advice to help you quickly categorize any item of produce you encounter. Read on to learn more.

#1 – Why Is The Vegetable Category Such A Quandary?

Why is it that some fruits and veggies, such as potatoes and apples are so easy to categorize while others perplex us?

The reasons range from culture to vocabulary usage to botanical identity to culinary custom.

In botany, the term “vegetable” typically refers to the edible parts of a plant not involved in plant reproduction.

The part of the plant resulting in flowering and pollination is typically thought of as a “fruit”.

In western culture, cucumbers are treated as vegetables in the kitchen and at the dinner table.

They are sold as veggies in the market. From a cultural and culinary perspective, cucumbers are a vegetable (produce).

#2 – Horticulturally, Is Cucumber A Fruit Or Vegetable?

For this reason, horticulturally speaking, cucumbers are vegetables. Apples are fruit.

In botany, all of the non-seed-bearing parts of a plant that can be eaten are considered vegetables. This includes:

If you can eat it, and it doesn’t contain seeds, it’s a vegetable.

If it develops from the flower and contains seeds, it’s fruit. For this reason, botanically speaking, cucumbers are fruit.

Potatoes are vegetables, as is celery.

#4 – In Culinary Terms Is A Cucumber A Vegetable Or A Fruit?

Furthermore, when an item of produce is served helps determine whether it is considered fruit or vegetable.

Cucumbers are usually eaten before the meal in salads or during the meal as a side dish; therefore, culinarily speaking, cucumbers are a vegetable.

Because cucumbers have such a pleasing taste and texture, it makes a great snack or addition to a wide variety of fresh veggie dishes.

Crisp, garden-fresh cucumbers are delicious in salads, sandwiches or eaten out-of-hand. It’s easy to see why these tasty, watermelon-like culinary veggies are also thought of as fruit.

Yes, with its mild flavor it can be used as you would watermelon and other light, watery fruits.

Here’s a cucumber ice cream recipe that is so simple a pair of very clever kids can do it!

#6 – What Kinds Of Cucumbers Are There?

There are a few different types of cucumbers:

If you don’t want to (or know how to) make traditional pickles, try making refrigerator pickles!

Cucumbers are very low in calories and very high in water content. This makes them a great, hydrating addition to dieter’s menus.

A full cup of sliced cucumber only has about thirteen calories and contains almost a full cup of water!

In addition to low calories and high hydration, cucumbers contain:

#8 – How Do You Choose Good Cucumbers?

“Cool” and “cucumber” go together. At your local supermarket, cucumbers should be kept chilled.

When shopping at an outdoor market, only buy cucumbers displayed in the shade.

Don’t purchase any that look withered, shriveled, bruised or bloated in the middle. Avoid overripe cucumbers as they have watery flesh, large seeds, and poor taste.

#9 – How Do You Keep Cucumbers Fresh?

When you arrive home from the market, get your cucumbers into the veggie drawer of your fridge right away.

Don’t peel them or wash them (unless they have a lot of garden dirt on the skin). If you do have to wash them, wipe them dry before storing.

If you have a lot of cukes and they would be crowded, wrap each one individually in paper toweling or a tea towel before placing them in the drawer.

This helps prevent bruising and decay.

Cucumbers bought from the supermarket usually have a wax coating and can last a week in the fridge.

Fresh produce straight from the garden does not have this coating and will not last as long. Use them within two or three days of picking.

If you have leftover peeled cucumbers, cover or wrap them tightly with plastic wrap and store them on the top shelf of your fridge (where it’s cooler).

Use them up within a couple of days. [source]

#11 – How Do You Prepare Cucumbers For Eating?

Wash cucumbers thoroughly before using them.

For a simple cool cucumber salad:

Other herbs and flavorings that go well with cold cucumber include mint, tarragon, red pepper, and lemon.

There are some places where cucumbers are served cooked. Their light flavor complements heavier meat dishes well.

It is especially nice with fresh game, such as venison.

For more information about this healthy addition to any diet see:

#12 – Do Cats Care If Cucumbers Are Fruits Or Vegetables?

As far as cats are concerned, whether a cucumber is a fruit or a vegetable is entirely irrelevant.

Cats are alarmed by any fruits, vegetables or other strange objects that sneak up behind them while they are eating (but mostly cucumbers and sometimes bananas).