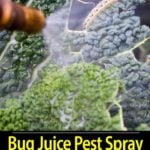 Have you ever heard of a “bug juice pest spray”?

Gardeners have reported using a “bug juice spray” with success to control or get rid of aphids on cabbage, pillbugs from munching on squash and beans, and slugs from making dinner of pepper plants.

Where Did Bug Juice Pest Spray Get It’s Start?

Home gardeners have made concoctions, mixes, brews, and recipes all in a search for natural ways to control pests.

Hot pepper and garlic spray to repel pests, insecticidal soap recipes, and other homemade creations. For decades organic gardeners have reached for pyrethrum sprays to control pests. Pyrethrum spray concentrate is made from Chrysanthemum flower heads.

However, why a blended mash of insects works for controlling pests is somewhat of an unknown.

The idea of collecting bugs and blending them up to create a spray is not a new idea.

The “bug juice” pest control concept goes back to 1960 when gardeners in California started trying sprays of bug juice to protect their crops after the USDA in California gave the “recipe.”

It should be noted that the EPA stopped the recommendation for a bug juice spray roughly 12 years later since it was not registered as an insecticide/pesticide.

In 1976 an article appeared in Organic Gardening Magazine. Frank Batey a peanut and soybean farmer in Florida, was battling bugs on his crops. The farmer shared how a pest control specialist suggested using “bug juice” on his crops.

The specialist was Mike Sipe who offered or “suggested” a simple method Mr. Batey could use to control the insect pests attacking his crops.

The method of collecting the bugs, blending, straining, and spraying was so effective that after two years of application, Mr. Batey did not need to spray his fields with his “bug juice insecticide.”

At one time, Mr. Batey used three quarts of insects to treat 500 acres with spray.

I collected samples of all of them, except for the southern corn borer, which makes a webbed tunnel underground and attacks the pegs of peanuts. It is just too difficult to find enough of them to make a spray. But on the other pests, the method did a great job.

I am not against using chemicals to help grow food crops, but I hate insecticides and always have. We should not be eating food with these poisons on them. It is important to have good, clean food.”

How To Use Bug Juice Insecticide In Your Garden?

Before using a bug juice bioinsecticide here are some additional guidelines to consider:

Bateria Can Quickly Spoil Bug Juice Pesticides making them lose their effectiveness. Basically, the mixture rots! Use the solution right away or freeze the leftover.

In fact, freezing some is a good idea for applying after a rain. The concentrate carries plenty of power and even when diluted at a rate of 25,000 times.

Do Not Use Bug Juice on pests that harbor or may carry human diseases such as mosquitoes, ticks, fleas, and other insects.

Do Not Use A Bug Juice Pesticide on crops unless the crops are being seriously attacked. You want to maintain a natural balance between having a few pests and insects which feed on the pests.

Use An Old Blender For Bug Juicing. The same holds true using separate sprayers for plants and a different spray for weeds. A simple mortar and pestle can also be used.

Check Crops For Damage – as mentioned above make sure the crop is “under a serious attack.” Maintain the balance.

Identify The Insect Pest – It’s important to identify the pests doing the damage. Having some insects in the garden helps provide food for birds, insects, and other animals. You want to control the one causing the damage.

Collect The Insect Pest – When collecting the insects collect as many as possible. Look for bugs that look “unhealthy or sluggish.” It’s better to gather 300 individual bugs than 30.

Why? More individual bugs increase the chances of having a really sick insect spread the active disease.

Keep the insects out of the sun. A good bug spray uses live insects.

Place The Insects Into The Blender – add a cup or two of rainwater or boiled water that has cooled. A good ratio is:

Stain The Blended Solution through a paper filter, cheesecloth, towel, or clean rag. This prevents clogging the sprayer with small bug parts!

Dilute The Concentrate Solution – For the home gardener dilute ¼ cup of “liquid bug concentrate” with one or more cups of rainwater or boiled water that has cooled completely.

NOTE: The actual rate of dilution is not critical (more below)

Freeze any excess in small batches to repeat reapplying if necessary. DO NOT refrigerate – FREEZE.

Farms have had success by mixing one ounce of “bug spray concentrate” in roughly 100 gallons of water with liquid soap for good control.

Spray Crops With Bug Spray Solution – Apply the solution using a standard insecticide sprayer or backpack sprayer. Cover both sides of the leaves along with the stems.

If the rain comes soon after application, reapply the solution. Use a frozen concentrate or make a fresh batch. Multiple applications are not unusual.

Check Plants Before and After Spraying – After spraying check the crops in a few hours to see what is happening. Revisit the next days, three days, and a week after application. You may not see results right away. Much depends on the type of insect disease or parasite in the bug juice.

Using an all-natural, organic bug juice insecticide spray is not new and may not work for everyone. More studies need to be done.

However, using the bugs against themselves is a great way to keep costs down and stay away from using chemicals in your garden and landscape.