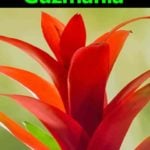 Question: I was given a Bromeliad Rana (under genus Guzmania) as a gift about a year ago, how can I get the Bromeliad to bloom again? It’s been in the same pot for over a year, is that OK? Kathy, Atlanta, GA

Answer: The Rana is one of the Guzmania hybrid varieties in the family called Bromeliad. Guzmania bromeliads cover a wide variety of “monocarpic” plants from edible pineapples and Spanish moss.

These tropical plants are Florida native, and can also be found in Mexico and other parts of Central America and South America.

What exactly are “monocarpic” plants? The short version – the plants die after flowering.

This death may occur slowly, but during its passing, your Guzmania plants should produce between 1 to 3 bromeliad pups or offsets you can separate and grow on to flower again, given the right conditions.

Does this indoor plant have pups? If so, they probably are growing larger!

These pups can stay on the mother plant, but it’s usually best to remove them once they reached about one-third to one-half the original plant’s size.

Related: Is A Bromeliad Plant Toxic To Cats?

Once removed, pot the tropical bromeliad plants up individually. Of course, the next question is – how?

For starters, where the pup attaches to the “mother plant”, remove the potting soil.

Once a pup reaches one-third the size of the original plant, a gentle pull or tug is all you need to separate the two plants.

If the offset does not pull away easily, cut the pup where it attaches to the mother plant.

Before potting your newly grown Bromeliad, let it sit in the open air (not in the direct sunlight) for a day. The air circulation allows the cut area of the air plant to dry.

Using a potting mixture of peat moss and perlite pot up the bromeliad cutting into a small pot.

Keep the well-drained soil mix damp and put the plant in bright light – no full sun or direct light. Keep the temperature over 65 degrees if possible.

Don’t expect the bromeliad flowers to bloom right away. It can take a few years for this flowering plant to reach mature blooming size.

Once the plant reaches maturity, you can force the plant to flower by placing the plant in a clear plastic bag and throwing a ripe apple inside the bag for 7 to 10 days.

The ripe apple will give off ethylene gas and will help force the plant to flower. By the way that’s a great little plant science experiment for kid’s science class.

Don’t overpot the plant, give it lots of bright light and water regularly, Bromeliads are easy to care for.

If all the potting and work sounds too much to handle. Do nothing and enjoy the trees as they are.