Boxelder bugs (Boisea trivittata) are so-called because they typically live in boxelder trees.

These bugs are mostly found in the western United States as far east as Nevada, but you can also find them in Eastern Canada and throughout most of the eastern US.

The main draw for these bugs is boxelder trees, so you‘ll find them wherever these host trees are to be found.

While these bugs don’t pose much of a threat to the trees themselves, they can become a real nuisance to people because they like to get into structures such as garages, sheds, and even homes during the cold winter months. 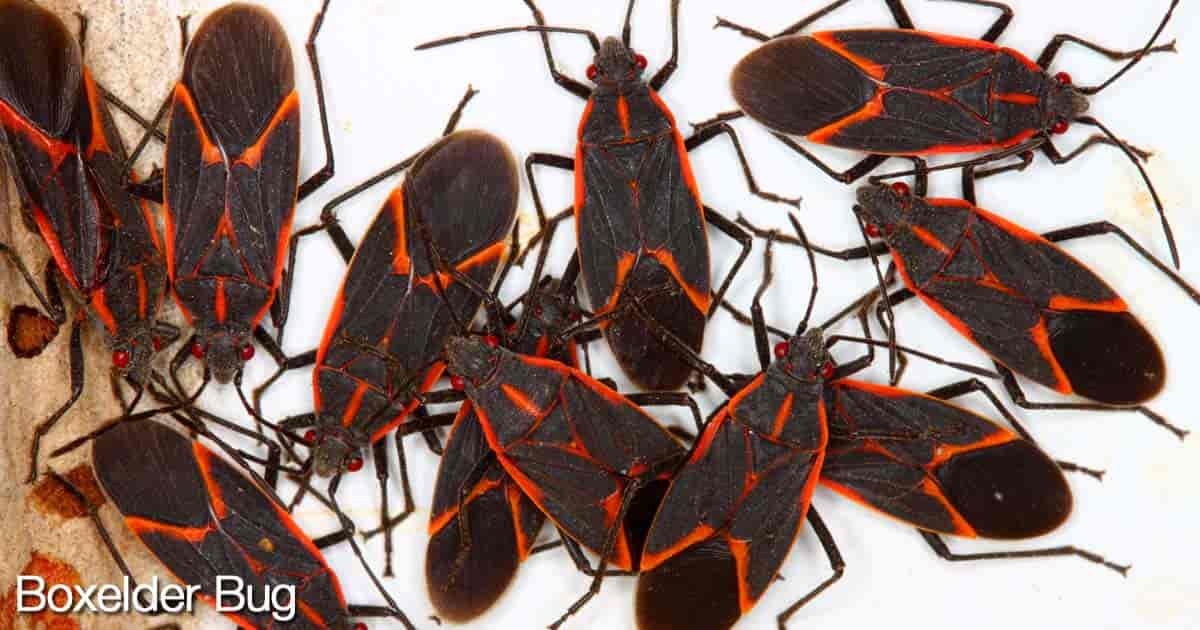 How can you recognize boxelder bugs? What can you do about them? In this article, we answer these questions and more.

Adult boxelder bugs are typically black with orange or reddish markings on their backs. They have six legs and they are an elongated oval shape.

Typically these flattish bugs are about half-an-inch long and a quarter-inch wide. The head of the bug is narrower than the body. They have long, thin, black antennae.

Immature boxelder bugs are nymphs. This means they look quite a bit like the adults, but they don’t have wings and are bright red in color instead of being black and orange or reddish.

These bugs are true bugs (Order: Hemiptera) and are often confused with other members of this order such as squash bugs, bordered plant bugs, pesky stink bugs, cicadas and red-shouldered bugs.

What Do Boxelder Bugs Feed On?

Early in the spring, they eat fallen boxelder seeds, and as the season progresses move into female boxelder trees or sometimes ash trees or maple trees.

What Do Boxelder Bugs Do?

Although they do eat the leaves and fruit of some trees, they don’t actually cause much damage.

You generally won’t notice boxelder bugs until autumn when they begin looking for a place to overwinter.

They tend to invade outbuildings and even homes when the weather begins to cool in the fall. Additionally, in the springtime when they emerge from hiding they can be something of a nuisance pest.

How Do Boxelder Bugs Get Inside?

These sneaky little bugs are very creative about finding ways to get into your home or outbuildings.

They typically sneak in entry points around baseboards, door frames and openings around windows. They may also find access through air vents, heating ducts, switch boxes or electrical outlets.

Be sure to check all of these places for gaps and openings. Seal cracks up tightly to keep boxelder bugs out.

How Do You Get Rid Of Boxelder Bugs?

The best thing to do is to prevent these bugs from getting into their hiding places for the winter. Be sure that there are no holes or cracks around windows or doors or in any door screens.

Use a good quality silicone product or silicone-latex caulk to seal up any cracks or crevices around your foundation or anywhere else in your garage, sheds or outbuildings.

Another good idea is to install door sweeps on all exterior entrance doors to prevent them from crawling under.

What Are The Best Ways For Boxelder Bug Control?

An application of insecticide to ornamental trees and bushes early in the spring can be effective in killing off the nymphs.

It is also helpful to identify and remove female boxelder trees that grow close to your home because these trees produce the seeds that feed the bugs and the larvae early in the springtime.

If you don’t want to remove the entire tree, just be sure to keep the ground below the tree clear of seeds.

Also remove debris and other potential hiding materials (e.g. leaf litter, piles of rocks, stacks of wood) where the bugs may tend to hide and lay eggs.

Once these bugs are inside your home, you should not try to kill them. This may seem counterintuitive.

However, if large numbers of dead boxelder bugs build up inside your walls or other hiding places they will attract other pests, such as carpet beetles and larder beetles among the others.

These bugs are far more of a bother and far more destructive than boxelder beetles.

The best thing to do is to simply wait it out.

In the summertime when all of the adult boxelder beetles are out of your house or shed, be sure to seal up any openings that might allow them to come back in.

If you do see a lot of boxelder bugs in one place during the wintertime, use a vacuum cleaner to gather them up.

Once vacuumed up take the bag out of the cleaner, seal it in a plastic bag and throw it away.

These bugs excrete a bad smelling (and presumably bad tasting) liquid when bothered, so not many prey insects or other animals eat them.

There is some evidence that rodents such as chipmunks, rats and mice may eat them, especially in the winter when other foods are scarce.

Larger, more intrepid prey insects, such as praying mantis and some spiders may also eat them, but smaller garden helpers (e.g. ladybugs) would not be able to.

In this video, a garden spider seems to have second thoughts about eating a boxelder bug!

Large birds, such as woodpeckers, crows and jays may eat them. If you keep fowl such as guineas, chickens, ducks and geese, they may be helpful to you in keeping boxelder bugs (and lots of other garden pests) under control.

For the most part, these bugs are fairly harmless. They are a nuisance, and you should be aware that their droppings can cause unsightly damage to your clothing, drapes, curtains and other surfaces. Additionally, if you handle a boxelder bug roughly or crush it, it will produce a very strong and offensive odor.

Can Boxelder Bugs Hurt You?

These bugs do have piercing, sucking mouthparts, but they don’t tend to bite.

If you happen to corner one or hold one tightly in your hand it may puncture your skin. It does not have any poison or venom or other dangerous chemical to inject.

Nonetheless, boxelder mouthparts are not especially clean, and if you do get poked by one you may develop an irritated, itchy red spot like a mosquito bite.

What Is The Life Cycle Of A Boxelder Bug?

During the warm months of the year, these bugs live in boxelder (and other) trees. During cold weather, they find snug, warm places to hide.

Twice during the spring and summer months, females lay clusters of eggs in various places around the garden (mostly in crevices in the bark of boxelder trees).

You may find these straw-colored yellow eggs deposited in on trees, shrubs, stones, the eaves of your home or even in the grass.

As the embryonic boxelder bugs develop, the yellow eggs become red. It takes about two weeks for them to develop fully, and then the eggs hatch.

The boxelder nymphs eat fallen boxelder seeds and then as they mature they begin to eat the trees’ leaves.

In the autumn, boxelder bugs tend to gather together on the warm, sunny south sides of structures, trees and rocks.

Once a large number has congregated, they go en masse in search of places to hibernate during the winter.

Typically they overwinter in homes or buildings. Their favorite places to hide include small crevices and cracks in walls where they are insulated against cold temperatures during the winter months.

If you happen to see a large congregation of boxelder bugs the fall, seize the opportunity to prevent their overwintering.

It’s easy to wipe out a vast swath of their population by simply drenching them with a solution of dish soap and water or use an insecticidal soap.

In fact, a good strong spray with your hose may do away with them as they are quite susceptible to drowning.

These bugs are excellent flyers. When searching for a place to overwinter, groups of them may fly as far as two miles to find the perfect hibernation location.

How Long Do Boxelder Bugs Live?

In an active state, adult bugs only live a few days. Individual bugs that manage to overwinter successfully in a dormant state will die a few days after mating and laying eggs.

Bugs that emerge into your home when temperatures rise during their hibernation die very quickly.

Are Boxelder Bugs All Bad?

Actually, boxelder bugs aren’t particularly bad at all. They are just annoying. Even though they do feed on leaves and seeds from several species of trees, they actually do little damage.

Even though they do tend to gather together in big groups in the sun on the walls of houses and buildings in the fall, they aren’t actually hurting anything.

Even though they do like to hide in walls during the winter, they don’t eat anything or bother anyone.

If they happen to emerge into your warm home during the wintertime, they won’t hurt you, and you can always just vacuum them up or toss them out into the cold if you want!