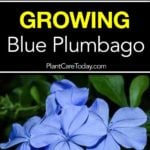 Have you heard of the plumbago plant – Ceratostigma plumbaginoides?

It’s a hardy, excellent choice for a landscape design in need of a groundcover type plant. The plant loves the heat, can survive long, humid summers, and is drought tolerant.

The name “Plumbago” (pronounced – Plum-Bay’go) derived from Latin plumbum, which means lead. It is believed at one time to be a medicinal plant used as a cure for lead poisoning.

What Is The Blue Plumbago?

The plumbago has been described as a fast-growing, semi-woody perennial shrub that produces phlox-like blue flowers almost all year round. There are many uses in the landscape for the plumbago plant.

The most common variety found in garden centers is, plumbago auriculata with beautiful blooms, light blue in color.

The different varieties and cultivars like the “Plumbago Imperial Blue” cape flowers are slightly different having a darker shade of blue.

When planted, the bush/shrub forms into loosely branched mounds that grow up to 36″ inches tall and wide. Although the thin branches of Plumbago have an arching habit, the plant has oblong foliage about two inches in length.

The bush with beautiful blue blooms not only attracts the eye but its scent attracts butterflies. If you are a butterfly lover you’ll love the plumbago to make your outdoors lively and beautiful.

In areas where there is no severe freezing temperatures or frost, the plant remains evergreen throughout the year.

The perennial plumbago blue thrives in the south in USDA plant hardiness zones 8 – 11, where it is used extensively as an outdoor landscape plant, planted in partial shade but in full sun locations.

In the north, this woody tropical semi-climber is right at home in the cool greenhouse or sunny window in winter, and in all kinds of container gardens in summer.

This evergreen shrub grows well when:

The production of abundant clusters of attractive cool pale blue flowers, make it a great choice for porch or patio use throughout the spring, late summer and autumn months.

When used as a groundcover or in beds it is best to plant in early Autumn or early spring.  Select a suitable growing location with lots of partial sun at a minimum.

Plant in a well-drained soil, full of organic material with a 1/3 of each – loam, peat moss, sand – consistency.

After planting, water thoroughly and allow the soil to become nearly dry before watering again.

Propagate by cuttings of nearly ripe wood in spring or fall, by root division of old plants, and by seeds.

In the fall, cut plumbago back severely, top-dress with fresh soil or repot, according to need.

Store potted plants fairly cool and dry until days begin to lengthen in earliest spring. Then, raise the temperature and force spring flowers in full sun.

Whether you are planting the plant in a garden bed or in a container, applying the mulch will help in reducing growth of weeds and improves retention of moisture.

A Guide To Watering Plumbago

When watering Plumbago flowers make sure to water thoroughly until all the soil around the plant(s) is moist. The plant does not require a lot of water. Allow the area to become dry before the next watering session.

Plumbagos are drought tolerant plants, they do not need watering more than twice a week during the warmer summer months. When the weather cools and fall begin, reduce watering to once per week.

How Often Should You Fertilizer Plumbago Plants?

Fertilize plumbago regularly, when plants have a strong root system and full flower heads! Apply a balanced fertilizer at least once per month for the best results. Follow the labeled directions on the bag.

Remember when the plants start developing flowers, they use a lot of energy. Provide plants with all the necessary nutrients they need.

Pest and Disease On Plumbago

One of the biggest upsides to planting the plumbago in the landscape goes beyond its many uses. Once established plants experience really no diseases or pests to speak of.

These herbaceous plants easily grow from  4-inch cuttings, taken from semi-ripe “wood” during the summer.

Dip the cutting in a rooting powder to stimulate root development and the hormone also acts as an anti-fungicide that prevents rotting of the cuttings.

Place cuttings is a well draining potting soil, in shade and water lightly. Keep the soil moist but not wet.  Cuttings take 3 to 4 weeks to develop the roots.

Once roots develop transplant into larger pots, with a well-drained soil rich in organic material, and feed with an all-purpose fertilizer.

Can You Grow Plumbago On A Trellis?

Growing plumbago on a trellis creates a colorful conversation plant for a patio or deck. They can grown in many ways but long shoots of the plumbago look terrific on a trellis or another type of support.

Indoors or in the greenhouse it is particularly important to tie, train, and prune the vine to keep it in shape and suitable size. Set plants outdoors for the summer, for continued bloom.

When And How To Prune Plumbago

The plumbago bush can become a scrawly, scraggly plant that will heap themselves into a plumbago hedge-like mound in tropical gardens unless they are pruned and trained to shape.

Indoors and in the greenhouse, they should be cut back to a reasonable size.

Since flowers are produced at the tip of new growth, pruning is done before spring for summer display, in early fall for winter bloom.

In tropical gardens, take your choice – train and prune each spring, or let the stems wander in their own way.

Plumbago is highly suitable for use as a flowering ground cover because it beautifully showers the air with its pretty blue star-shaped flowers making it one favorite of the butterfly.

Its fast and bushy growth habit makes it a perfect “exclusion zone” or bush-clump plant for attracting birds.

The Plumbago Plant is simply a winner in the landscape and on the patio.

Species of The Plumbago Plant