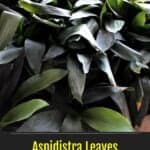 Everyone knows it’s almost impossible to kill aloe vera, but what most gardening enthusiasts don’t know is that there’s an even tougher group of plants called cast-iron plants.

Most cast-iron plants are Aspidistra elatior (ass-pi-DIS-truh ee-LAY-tee-or) and its cultivars. However, the name also includes a few select cultivars of Aspidistra lurida and Aspidistra yingjiangensis.

Sometimes also referred to as barroom plants due to their ability to handle almost any living condition.

These plants have long been cherished in their native homes of southern Japan and Taiwan.

They were also popular in the Victorian era, and it wasn’t until a resurgence of popularity in the 1980s that botanists began to scrutinize the Aspidistra genus.

Now, aspidistras are popular in the West, both for their foliage and ability to be grown under decks and in other heavily shaded spots.

But what is it about aspidistra leaves that have made the plants so useful?

Aspidistra leaves (especially those of the cast iron plants) have their own intrinsic beauty, to the point they’re even used in the fine art of ikebana (Japanese flower arranging).

Here’s what you need to know about these leaves, from their uses to their common ailment.

It’s hard to find a plant as robust as the cast iron plant.

While many other aspidistras are only now gaining in popularity, the cast iron plant’s ability to grow in poor soil and low light means it will fill out spaces in your garden that would otherwise be left barren.

Shady corners and under decks and porches are just a few spots where this plant can go.

However, in sunnier areas of the garden, the incredibly long leaves of this plant make an amazing accent to sunflowers and other tall but sparsely foliated plants.

Value In The Home

While it makes for a wonderful accent on entryways, lobbies, and living spaces, their plants truly shine in hard-to-grow rooms such as the bathroom.

Unlike many other indoor plants grown for foliage, Aspidistra is completely safe and non-toxic to humans and pets like cats.

It’s not even known to cause allergic reactions in people with sensitive skin or hay fever.

Note, however, that the leaves will need to be wiped down occasionally to keep the dust off and that variegated cultivars will lose their patterns if they don’t have some light exposure.

Ikebana is the sacred art of flower arranging and one of Japan’s most treasured art forms.

Several common houseplants have value in this art form, but aspidistra leaves tend to have their special place for many practitioners.

The dried, brown leaves are often mixed with fresh leaves to create colorful accents, and the size of an aspidistra leaf allows it to compliment flowers that are too tall for most other arrangements. Can you cut back Cast Iron plants?

Even the hardiest and toughest of plants can run into problems now and then, and the fact that aspidistras comprise almost entirely of leaves means they’re prone to a few common foliage issues if neglected long enough.

Even the hardy cast iron plant can begin to suffer after enough neglect.

Improper watering or soil/fertilizer conditions can lead to the leaves developing brown or yellow marks and eventually losing their green.

This might be intentional when drying out aspidistra leaves for ikebana or decoration. However, seeing yellow leaves on the cast iron plant itself is a sign of extreme distress that needs fixing.

As with all plants, variegated cultivars of Aspidistra will lose their wonderful colors if they don’t get enough sunlight even for cast-iron plants. So aim for a non-variegated plant when you’re filing especially shady areas of the garden or home.

As adaptable as these plants are, they are still live on the forest floor.

Too much direct sunlight, especially at midday, can scorch the leaves.

When placing in a sunny spot of the home or garden, keep the plant in bright, indirect sunlight, dappled sunlight, or limit it to morning sun exposure and afternoon shade.