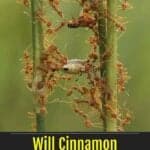 Can you get rid of ants in potted plants with cinnamon? No.

Cinnamon powder is not potent enough, and it’s not possible to introduce a high enough concentration of cinnamon essential oil into a potted plant to kill ants without harming your plant.

However, there are other natural methods to use to get rid of ants in plants.

Is Cinnamon An Effective Ant Repellent Or Insecticide?

Another group of researchers from Universiti Teknologi MARA Perlis studied whether cinnamon essential oil could be an effective ant repellent or insecticide.

When they increased the concentration of cinnamon essential oil in their medium to 20% percent, the mixture repelled ants consistently for an hour.

The study further showed that a 20% cinnamon essential oil mixture killed all ants exposed to it for at least 90 minutes.

You cannot get rid of ants in potted plants with cinnamon because the quantity necessary is neither practical nor healthy for your plant. Cinnamon can however mess with their scent trails.

The same Cornell study mentioned above states that cinnamon essential oil can have a phytotoxic effect on plants. That means that cinnamon can be toxic to plants and affect plant growth.

What Should I Do If I Find Ants in My Potted Plant?

The first thing you should do when you find ants in a potted plant is to take the pot and plant outside so that the ants don’t further infest your home.

If you have a larger plant with an entire colony living inside, you will want to either kill or relocate the colony.

How Can I Get Rid of Ants in Potted Plants Naturally?

I’ve had multiple infestations of ants and never had any luck whatsoever deterring ant infestations with cinnamon. However, there are several natural solutions to get rid of ants in potted plants.

The only effective natural method I’ve personally used to get rid of ants involves killing as many as possible with sodium borate, an alkaline mineral salt commercially sold as Borax.

Borax disrupts ants’ digestive systems and eventually kills them. Some ants will drink long enough that they die drinking. However, worker ants also bring Borax back to the colony for other ants, including the queen, to ingest.

More on Using Borax in The Garden

The best recipe I’ve used is to mix three parts sugar to one part Borax, combined with just enough warm water to make a syrup. You will want to put the mixture in shallow dishes near (not in) your potted plant.

When ants walk through DE, electrostatic attraction causes the dust to cling to them. It abrades the waxy coating on the ant’s exoskeleton and eventually causes the ant to dehydrate.

Food Grade Diatomaceous Earth is safe to use on all plants. You can sprinkle it directly on top of dry soil in your pot.

Be sure to follow package directions and use goggles, masks, and gloves when handling them because they can irritate the skin.

Other natural solutions include:

If you want to relocate the ants instead of killing the colony, you can remove them and repot your plant following these steps: