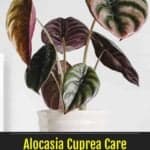 Alocasia plants are some of the most popular competitors with pothos when it comes to houseplants.

But one of the more compact Alocasia varieties from Borneo has created quite a stir, even among alocasia fans: Alocasia cuprea (a-loh-KAY-see-uh KUP-ray-uh).

Known most commonly by its scientific name or jewel alocasia, this perennial member of the Araceae family has many aliases, including:

Cuprea is also referred to as red secret, which happens to be the name of a cultivar.

Cuprea is smaller than many of its siblings, generally achieving a height of only 1′ foot and never passing 2′ feet, even in ideal conditions.

It’s a slow grower, requiring between 5 and 8 years to reach its maximum height.

The leaves, meanwhile, are large and heart-shaped, measuring anywhere from 8 to 24″ inches in length.

The name “cuprea” refers to the coppery tint of this plant’s leaves, a glossy, almost plastic bright green with lighter veins and a reddish underside.

As with all alocasias, the flowers are small and easily missed.

They have a small white to green spathe, and the spadix bears its small blooms for only about 3 days before fading, usually in late spring to early summer.

Oddly enough, this plant sometimes flowers as a sign of distress due to such things as root rot, sudden environmental changes, or overwatering.

This Alocasia prefers moderate light but will be OK with bright, indirect light or morning exposure.

Try to avoid direct sunlight, especially during midday, as the leaves are easily scorched.

Outdoor plants would benefit from the dappled sunlight provided by a nearby tree.

Jewel alocasia likes higher humidity, thriving most at 80 to 90% percent, but will tolerate a more moderate humidity of 40 to 50% percent.

Be sure to supplement your Alocasia with a pebble tray or humidifier if it’s not grouped with other plants.

Outdoors, Cuprea will only grow in USDA hardiness zones 10-11 and some sheltered parts of zone 9b.

It’s cold intolerant and can die if exposed to temperatures below 50° degrees Fahrenheit.

If in a container, it can be taken outdoors in warm weather but should be brought in if the temperature drops below 60° degrees Fahrenheit.

Use the finger test to check the soil’s dryness.

Your cuprea will need watering when the soil has dried around 2″ to 3″ inches from the surface.

Pour the water slowly, working your way around the pot, so the soil gets even watering.

Stop when you begin to see water seeping out of the drainage holes.

Cut back in the fall and winter and stop watering during this time if you’re growing the plant outdoors.

Use a balanced ½ strength liquid fertilizer, applied according to the instructions on the package.

A good frequency is once per month throughout the growing season, stopping from mid-fall through winter.

Root rot is a major concern with alocasias, so you will want to give it rich, well-drained soil.

Go with a quality brand of potting mix for succulents or tropical plants.

Alternatively, you can keep the plant in an equal mix of coconut coir and perlite.

Coco coir is a nutrient-rich material made of coconut fibers that, unlike peat moss, won’t retain a lot of water.

It can retain three times its weight in water, releasing it slowly back into the soil.

Both materials have a neutral pH and won’t compact too heavily over time, so your plant’s roots will always have room to stretch out.

You will need to repot your Alocasia every 2 years in the spring.

If the plant seems a bit crowded, you can choose a container one size larger than its current one.

Try not to give it a container that’s too big, as this can make the soil moisture uneven.

Also, you should always give the plant fresh soil when repotting to restore the nutrients.

This plant appreciates a bit of pampering but is not generally demanding.

Look for yellowed, damaged, or dying leaves and make a clean cut with sharp, sterile shears below the discoloration.

Be sure to sterilize between each cut, as the discoloration may be a sign of infection.

Jagged or uneven cuts can result in a shock to the plant, so try to make each cut in a single clip.

Other Popular Alocasias To Grow and Collect

Unlike most of your plants, stem cuttings are not a viable means of Alocasia propagation.

Instead, you will need to use either division or offshoots from the mother plant.

Despite its susceptibility to root rot, it’s possible to propagate this plant in water.

Alocasia cuprea is vulnerable to both drought and cold, having zero frost tolerance.

Although fungus gnats and thrips may also become a problem, aphids, mealybugs, and spider mites are the main enemies of this species.

They can also suffer from botrytis, leaf-spot, powdery mildew (usually due to an infestation), rust, and southern blight.

Like all members of the Araceae family, this plant contains calcium oxalate crystals, a substance known to cause kidney stones.

All planets containing these crystals are considered toxic to humans and pets and may irritate the mouth or cause digestive issues if ingested.

The more compact size of this plant makes it perfect for centerpieces, tables, or patios.

The red undersides can add an extra accent if placed on a raised area, such as shelves.