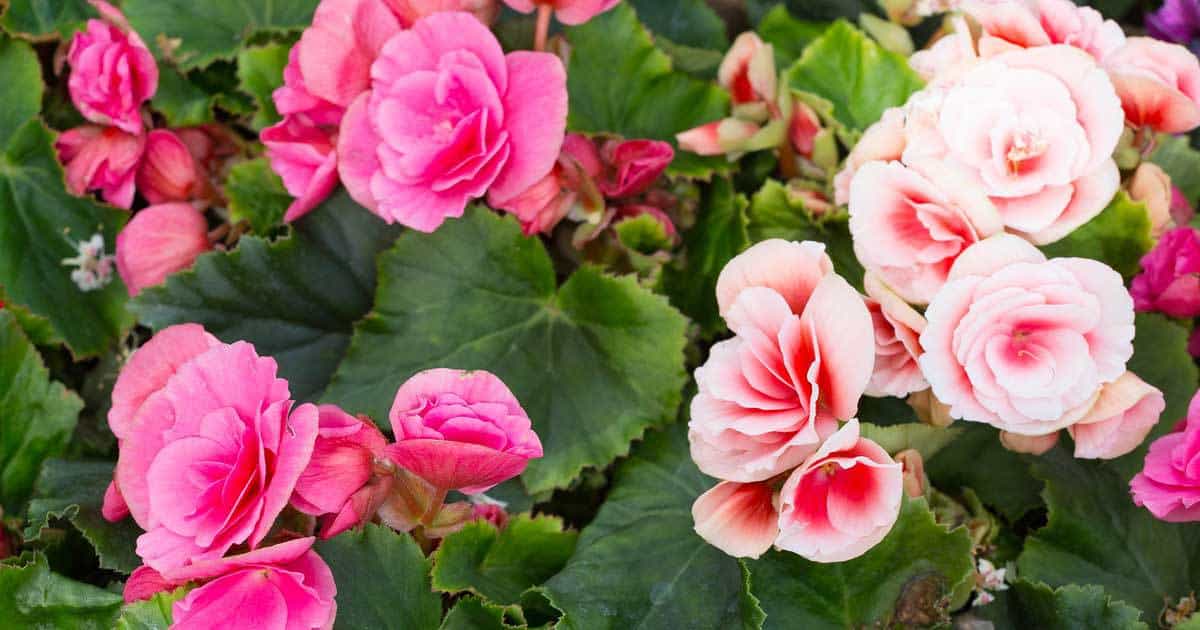 Summary: The tuberous begonia is one of the best plants to grow in a shady spot. They are showy, summer-flowering plants that can be grown in: beds, borders, pots, planter boxes and hanging baskets.

Question: What is a good plant to grow in shady areas in our backyard around our patio. The area is bright but gets filtered shade for much of the afternoon. We want some flowers and not just ferns with more green. What do you suggest? Leslie, Sonoma, California

Answer: Leslie, “What can I grow in shady spots?” That’s an old ongoing question to garden editors, county agents and others who answer questions raised by new green-thumb enthusiasts.

One of the best answers is tuberous begonias. For not only do these showy, summer-flowering plants like shade, but they also fancy the acid soil usually found with shade – two fondnesses not shared by many other plants.

Plus, these tuberous bulbs or corms are adaptable to beds, borders, pots, planting boxes and hanging baskets.

If the begonia bug really bites you, you’ll soon run out of garden space! Far from being content with a mere couple dozen plants, you’ll want hundreds.

For today’s large-blossomed hybrids have a compelling beauty indeed – a perfect symmetry and-petal texture that rival the beloved camellias!

Moreover, the forms and colors they now come in are intriguingly various. You’ll want to own representatives of these bulbous plants.

The giant double camellia-flowered type is the most popular. If fed wisely, these plants bear blooms 8 to 9 inches across. Other hybrids that rate high are the double carnation-flowered type, crispa or single frilled, hanging basket, picotee double, rosebud double, and narcissi flora.

Blooms of the ladder resemble giant daffodils. Colors vary from red through pink, orange and yellow to white. The only colors not represented are – blue and lavender.

The wonderful range both in form and color of the hybrids, as well as their superior substance and size, are a far cry from the original wildlings found in Central and South America. The man most responsible for this face-lifting of the tuberous begonia was Frank Reinelt of Capitoia, California.

His breeding work, which began in the mid-thirties, soon resulted in the larger blooms with better forms borne on exceedingly vigorous plants. His Pacific strain was known all over the world.

At this season you can start begonias in the garden or in pots either from tubers or seedlings, which, surprisingly enough, ship great distances quite easily.

In colder regions, tuberous root are started in pots during February and set out in the garden when the weather is warm. In this way a longer season of bloom is possible.

Planting from seeds requires a greenhouse and is, quite honestly, a feat to be undertaken only by experienced green-thumbers. Learn how to grow them the easy way first, then graduate to planting from seed after you have gained some experience.

In the greenhouse seed is sown in January so that there will be a long growing season. Such seedlings of these flowering bulbs will grow flower buds that normally bloom by July and yield fine tubers by late October or November.

Specimen plants, either with buds or flowers, are sold by specialists from June to Labor Day. The advantage of selecting a plant in bloom is that you know exactly what color you’re getting.

In planting tuberous begonias, site is important. As already mentioned, partial shade is best, especially when the light is filtered by overhead tree branches. The north or east side of a house is fine too. Avoid spots indoors where the hot afternoon sun may hit the plants.

In total shade, however, begonias get lanky and produce few or no flowers at all, contrary to the belief of many folks.

There’s also a false belief that begonias will succeed only in cool gardens blessed with ocean fog. It’s true that they grow best in such spots, but reports from all over America indicate that begonias grow in a wide variety of climates — Salt Lake City, Chicago, Wenatchee, Atlanta, Boise.

Soil is next in importance to site for the successful culture of tuberous begonias. Don’t grow them in ordinary garden soil and expect them to thrive. The ideal mixture is:

Prepare the ground three months in advance so that the soil will be in proper condition at planting time. Tuberous begonias are surface feeders. Their fine feeder roots spread out horizontally instead of deeply.

Therefore, the beds of light, rich, well-drained soil need go no deeper than 8 to 10 inches. Naturally tuberous begonias need good drainage, for without it the soil or mix will turn sour. Spade up the soil deeply each year, adding leafmold and rotted manure.

Although tuberous begonias require much water, an excess is harmful. They must be kept damp, not soggy, at all times. Number of waterings needed varies from one a day in cool, shady places to two or more daily in sunnier, drier locations.

It is best to irrigate the ground. Yet sprinkling seems to work satisfactorily if the sun does not strike the plant directly and if the atmosphere is warm enough to evaporate the water in a few hours.

In hot interior valleys, overhead waterings are often made two or three times a day to supply artificial humidity. The high humidity appreciated by begonias can also be furnished by means of permanent pipe lines installed in the beds, with mist sprayers attached. These sprayers are the same type as those used in vegetable bins and supermarkets.

Rain water is ideal for begonias, as city water is often treated with chlorine, which is somewhat harmful to plants. Alkaline or hard water should never be used for begonias.

While the manure and leafmold in the original soil mixture supply much food, commercial growers advise monthly feedings – but light ones – of a 10-5-5 liquid fish fertilizer. This organic food, which cannot possibly burn plants, stimulates production of better blooms.

Don’t prune tuberous begonias. Their stems are thick and juicy, and an open wound may be immediately attacked by minute fungi, particularly when air circulation’s bad and the plants are crowded. If a branch is broken off by accident, play safe and dust the open wound with charcoal. Also, when cutting the flowers, take only half the stem. The half that’s left will mature and then fall off, leaving no wound.

Tuberous begonias make excellent cut flowers. When floated in shallow containers, they last five to six days. Syringing their faces daily with a few drops of water improves their appearance. The double-flowered kinds last the longest.

The big show specimens are best grown in a greenhouse, where conditions can be controlled. They need thorough ventilation night and day, for high temperatures produce rapid, weak growth and smaller, inferior flowers. A 65° to 80° temperature is about right. In warm inland sections where summers are too hot, greenhouse culture is out of the question. It’s almost impossible to keep the plants cool enough.

How To Grow Tuberous Begonia In Pots

For pot culture any rich, light soil is suitable. A mixture of 2 parts coarse leafmold and 1 part loam brings good results. It is important that the potting soil or potting mix be of a light, coarse character so that it will drain well. Finely-sifted soil packs down, preventing the air circulation defeating the purpose as to why you should place them in a well-ventilated area.

To insure perfect drainage, place at least 1 inch of gravel on the bottom of the pot. Use small pots in the beginning and move plants later into large pots before they become pot-hound.

If tubers have been well started in peat with a considerable root system, they may be planted immediately in large pots. One-year-old tubers will take 6 to 8-inch pots; older tubers. larger pots. Keep only the surface moist while plant is young.

When growth is well developed, heavier watering is justified. Be particularly careful not to overwater in the beginning, as the plants, especially hanging-basket types, may die out entirely. If very strong growth is desired, once plants are established in final pots and have developed at least four leaves, feed them once a week with liquid fish fertilizer.

Most hanging types of tuberous begonias are rampant growers and require disbudding to produce evenly balanced specimens. If only one to three stems are on the tubers, they should be pinched off when the first bud appears to induce the formation of side shoots. Disbudding should continue until growth is quite advanced.

In some sections, small, slimy black slugs eat the flowers. Fight them with a metaldehyde slug dust, which gets snails and cutworms as well. Routine spraying or dusting with malathion or neem oil not only kills common pests such as aphids and white flies but prevents brachyrhinus weevil damage to foliage and tubers.

The most common failure with all tuberous begonias is the falling off of buds before they can develop. This is caused by severe drying out or over-watering of garden or pot plants or by the latter’s being grown in too small pots with insufficient food.

In hot weather the flowers develop too rapidly, and the plants, by drawing much more water than usual from the soil, tend to throw off the buds. Too heavy shade produces abundant growth, with few or no flowers.

Curled and shiny foliage is a sign of too strong sun. The most damage is done by overfeeding, the first signs of which are a softy, glassy texture of the foliage, leaves curling under gradually, wilting and dying off.